I can't believe it's been three months since I traveled around the U.K. on a solo tour, and so much has changed in the world since then. These days it seems like a distant fantasy to go and bounce around foreign countries for the thrill. I find myself staring off into the distance, picturing the memories I have of rolling snowcapped mountains during my time abroad this past January.

I took a three-week-long trip around the United Kingdom and Ireland to celebrate my birthday all month. My first stop was England; landing in London, trekking around the countryside of the Cotswolds and floating around the romantic city of Bath. After all that in week one, the next stop on my quest was Scotland. I've always wanted to go to Scotland. I've known so much about its history from being a huge history nerd back in school, from watching Outlander, seeing the many movies about Mary Queen of Scots, and the list goes on and on. I just knew it'd be a super fulfilling addition to the journey. It turned out to be everything I hoped and dreamed it would be and more. Day One

I flew into Edinburgh from London Gatwick airport. It was a late flight that landed around 7 pm. Once I touched down and took selfies by the welcome sign, I caught an Uber straight to my Airbnb. The Edinburgh Airbnb was my absolute favorite stay of the entire trip. It was filled with art and vintage portraits and the walls were painted emerald green. There was a cowry shell chandelier on the ceiling, and the bookshelf was overflowing with Scottish books.

The host of the apartment was my height (five-foot-two) and we talked all night upon my arrival. She was so warm and inviting, becoming the dear friend I needed that evening. She even let me do my laundry in her private washroom the next day. The night I landed, I'd been exhausted from traveling all day having started the day in Bath, England. (I took two trains from Bath to London. Then, flew to Edinburgh from the London airport all in one day.) So, I ordered local delivery food and settled in, talking to my mom on Facetime and taking a nice, hot shower.

The next day, I stayed in bed searching for tickets to explore the town's monuments. My host baked fresh bread in the mornings, so I ate a ton of bread with butter and jam while doing my laundry, listening to music and planning the next leg of the trip. Day Three I bought tickets to view Holyrood Palace and Edinburgh Castle. It was all too real to be there in real life. I couldn't believe I was standing somewhere where some of the great people from my history books lived and breathed and fought and died. I was going insane from just being able to touch the same tapestries on the palace walls that hung while they lived.

I walked the Royal Mile from one castle to the next, stopping in between at a mystic shop where I bought a Celtic wrist band. I also stopped for lunch at a pub where I tried Haggis, Scotland's national dish, for the first time. The pub owner had traveled to the States before and was great company to talk to.

At the edge of the gates of Edinburgh Castle, you can overlook the skyline of the city and I remember standing there, melting at the sight. Scotland is a beautiful place unlike any other. Its true beauty, however (yes, it gets even better) lies in the Highlands. Day Four The next place I decided to visit was the Isle of Skye, a place suggested to me by both my Scottish host and people I'd talked to in England. They described it as a magical place and they seemed to light up when talking about it. I even read that at certain times of the year, it's a great place to see the Northern Lights. So I knew it would be the perfect place to spend the actual day of my birthday. I needed to figure out how to get there in the smoothest way possible using maps, research, and online travel guides. The travel app RometoRio is a godsend for these kinds of solutions. I discovered the best way was to take the train up to Fort Willliam and take a bus into Portree, the main city of Skye. I also needed to make sure there was a good route for me to make it over to my next stop, Ireland, from way up there.

Once I figured it out, the tickets were booked. Done. I could say goodbye to Edinburgh no matter how gorgeous and amazing, and trek up to Portree. The conversations on a Scottish train are to die for. The Scots are so alive, expressive, loving and joyful people. Day Five Spending time on the Isle was breathtakingly beautiful. It was like spending time inside a perfect postcard. I had that feeling where you don't believe where you are is real and start to question whether or not you're dreaming. I felt like I was walking around in the purest form of Earth, at the beginning of time.

My first day there was such a deep breath. I chose a place that had a lounge with a cozy fireplace and I could search for ways to spend my time with my feet up. I sat in the lounge with my laptop and enjoyed the view of snowcapped mountains while sipping an Irish coffee. While there, I met a Scottish couple named Dave and Carol. They treated me as if I were their own child on vacation, giving me all the inside scoops of the Isle and offering to take me out to see the sights with them.

I politely declined. They seemed genuine, but my gut feeling was to not even risk it. Instead, I found a certified tour guide who was willing to take me out in the snow for a full day of sightseeing. I booked a day tour with Skye Luxury Tours and spent the day trekking the mountains and standing at the edge of Scottish Highland cliffs; something I've always dreamed of doing.

Stuart was the greatest friend and tour guide. He drove me out to all the best landmarks and even took me to the Talisker whiskey distillery where I got to sample five different kinds of exclusive whiskeys. The manager came out and gave me a lesson on whiskey tasting. Now I'll be the person at the bar sharing what I "learned in Scotland". This was all on the actual day of my birthday and it made my birthday trip so complete, even at its halfway mark.

The hotel I stayed in made me a birthday dessert that evening at dinner in the downstairs restaurant. It couldn't have been a more perfect day. All the karma from all that whiskey guzzling hit me the next day. So I stayed in and had a nice bath, ordered room service and relaxed on FaceTime with friends back home who wanted to make their own birthday wishes and get updates on the details of my trip thus far. Day Seven That day, I used that recovery time to book all my next round of tickets to get to my next stop, Ireland, from the Isle. After reassuring my bank it was me who was traveling all these different places and convincing them to unfreeze my credit card, I booked all my tickets and went down to the lounge to tell David and Carol all about my experience on the day tour. We had dinner in the hotel restaurant and they showed me tons of photos of their home in the Highlands and their children. 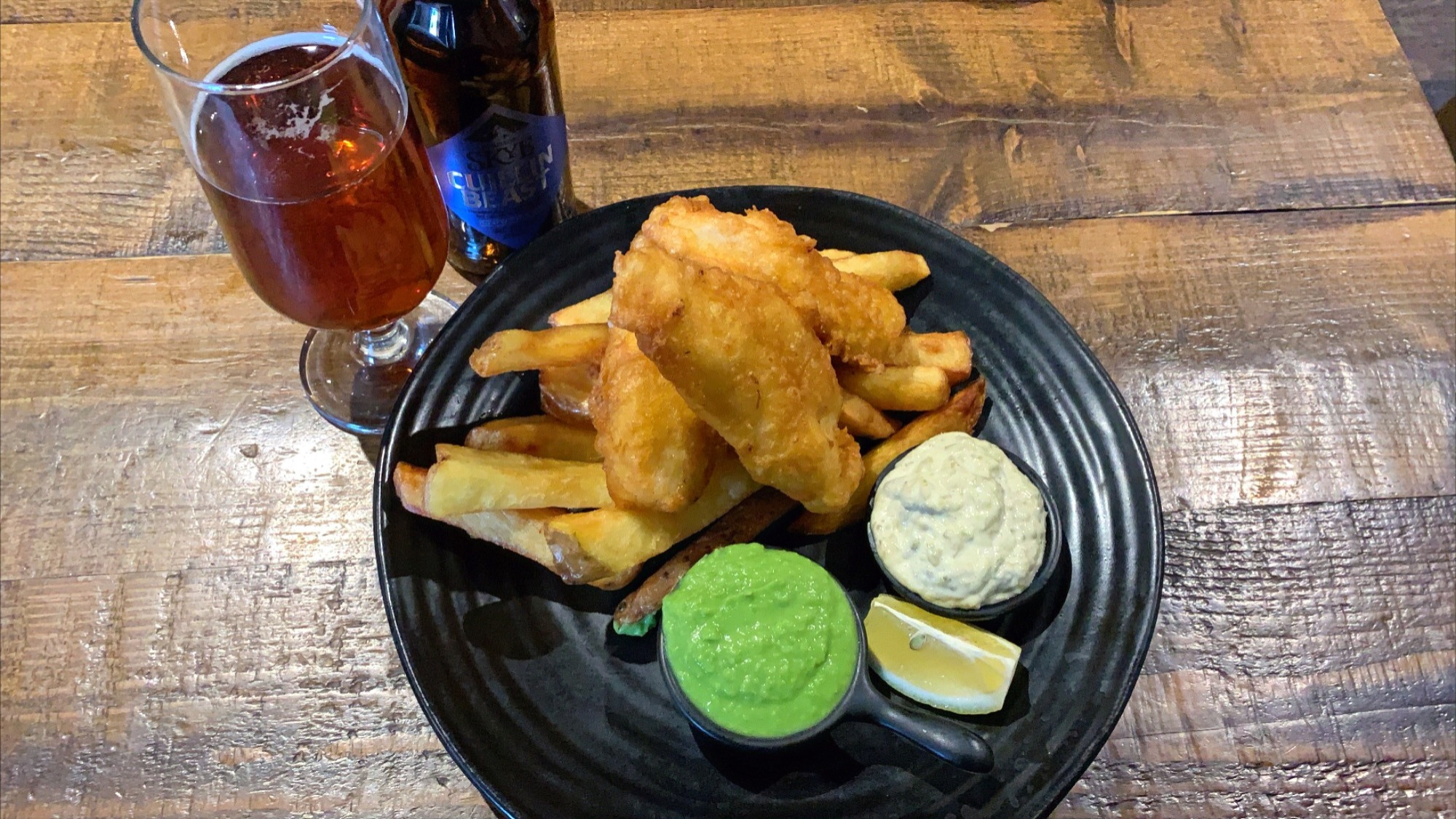 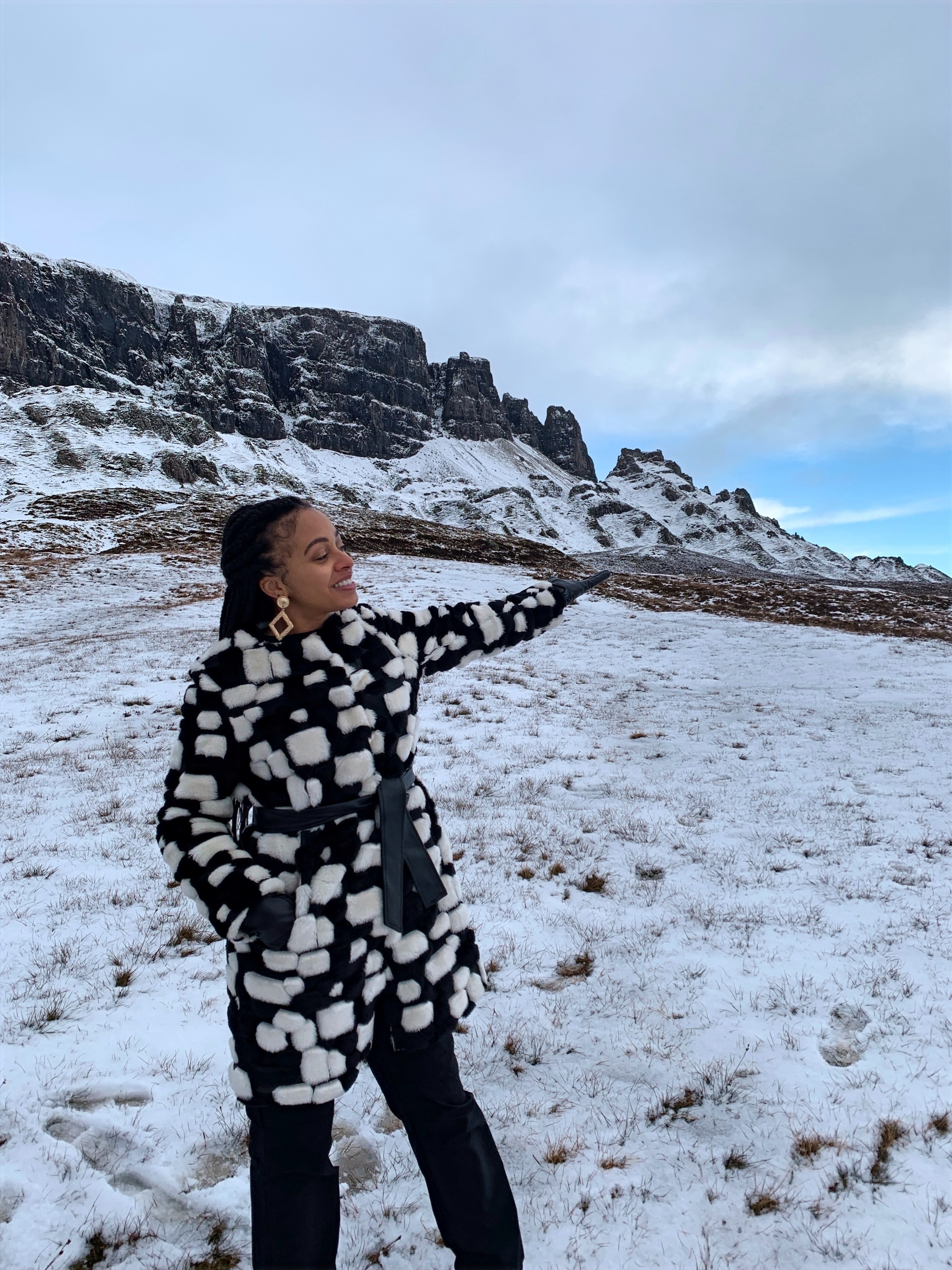 After dinner, I stayed downstairs and drank wine with a couple of girls who worked on staff at the hotel, Karina and Stephanie. Karina just happened to be from Ireland and gave me all the tea on what to do when I got there; pour a pint of Guinness from behind the bar, go to a Trad session, and see the Cliffs of Moher. I also told them what they should do when they get to Atlanta, GA someday (have fried chicken and waffles, see a game at the stadium, and go to the Coca-Cola factory)

I love everything about Scotland. From the genuine kindness of the people to its vibrant, rustic red, lush green and crystal blue landscape. I've always known a lot about Scottish history and I was so excited to be crossing it off my list of places I wanted to visit someday. I even have roots there, according to my genealogy map from Ancestry DNA. Now that I've been, I feel even more whole than I did before. I have so many more stories to tell and memories to store away for rainy days. Some places hold a special place in our hearts and we don't even know why. It's as if we're connected to places we've never been to. I want to visit all those places, any chance I get.

You can find more details, photos, and videos on my Instagram story highlights.

10 Things to Know About Solo Travel